skip to main | skip to sidebar

The Death of David Kelly - On 18th July 2003 were ministers and civil servants seeing something like this?

The image below is of Cabinet Office Briefing Room A, sometimes referred to as COBRA.

A Cabinet Office Briefing Room is as much a procedure as a physical location. Since most COBR meetings are held in Conference Room A in the Cabinet Office the UK Government emergency or crisis procedures are often referred to as COBRA. 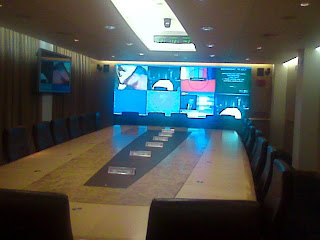 On 18th July 2003 were UK Government ministers and civil servants viewing a bank of monitors similar to the one shown in the image, perhaps including transmissions from Harrowdown Hill via the mystery helicopter which was the subject of media interest over the weekend?

Was COBRA communicating with the Kelly home in Southmoor via the 110 foot high communications mast?

And was COBRA communicating with Tony Blair in an aeroplane en route from Washington to Tokyo?

At present we don't know with certainty the answers to such questions.
Posted by Andrew Watt at 20:52